Pleased to meet you. 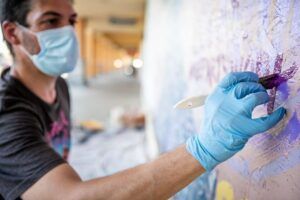 Coming to you from the sunny tropics of Miami, Florida, where Sebastian Carlo Moreno (Bash) lived through his teens before he headed over to NYC, drawn to the abundance of culture that gives life to the metropolis.

His curiosity and explorative nature led him to find expression for his creativity in different styles and forms of art during his time in the Big Apple. From black book scribbles to 3D-printing to music and video production,  numerous free-spirited abstract visions amassed as the constantly evolving artist crafted his own unique style.

“My work is the world I see around me amplified, and not contained by the reality in which we exist. The visions are like a kaleidoscope, always giving something new to be seen within the view”, defines the artist.

Determined to scale work in a 3D-printing project, he made a move to innovate in the Bay Area. After only a short period checking out the hilly landscape, Bash found himself rolling down to Southern California, where his art transcended and he is now at his most creative and productive period so far.

Currently based in Long Beach, Bash can be seen wandering by the Belmont Pier where he loves to watch and listen to the waves and recharge. Enjoying the natural world around him is one of his many passions, and it is translated in many of his pieces. Bash is inspired by all of the wonders of life we have come to know, both the massive and microscopic, our biologies, our energies, our vibrations, from cells to trees and flowers, to the creatures of the deep ocean, up to the clouds in the sky and beyond to the cosmos that all of this resides within.